The Lichfield Gospels (recently more often referred to as the St. Chad Gospels, but also known as the St Teilo Gospels, the Llandeilo Gospels, and variations on these) is an 8th-century Gospel Book housed in Lichfield Cathedral. The Llandeilo Gospel book, a beautifully illuminated Biblical manuscript, is a masterpiece of 8th century book production, and a great spiritual, artistic and cultural treasure. The origins of the book are shrouded in mystery, but it is closely related to the Lindisfarne Gospels, and the product of a monastic scriptorium. The art historian Peter Lord dates the book at 730, placing it chronologically before the Book of Kells but after the Lindisfarne Gospels. For perhaps 200 years, from the early ninth century, the Gospel book was in the possession of the religious community founded by St Teilo in Llandeilo Fawr. It was presented to St Teilo’s church by a Welshman called Gelli who had bought it for the price of a good horse. Exactly how it came to leave Llandeilo Fawr is not known but it has been in the possession of Lichfield Cathedral since the late 10th century. 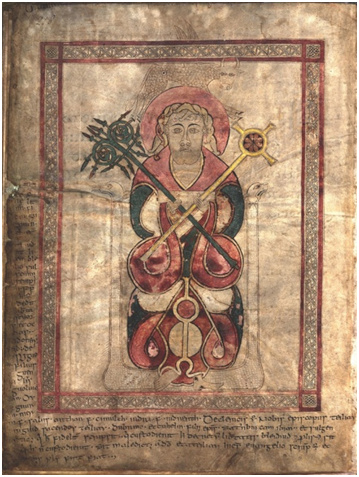 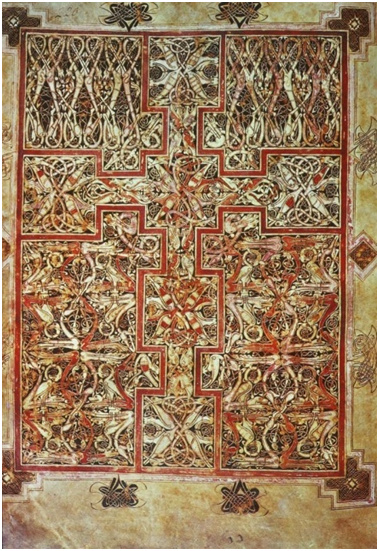 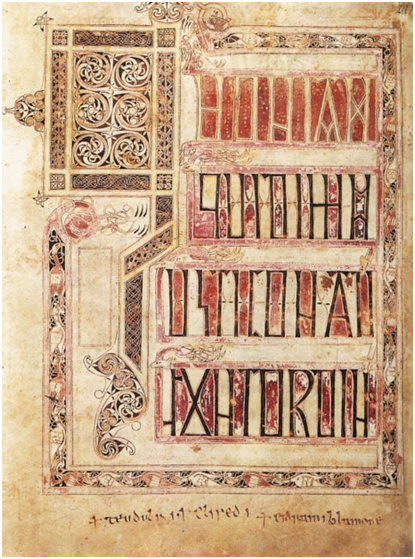 The gospel book as it survives today bears witness to a violent early history. The original binding which may have borne precious metalwork seems to have been ripped away, probably by looters. The introductory pages are gone and damage on the opening page of Matthew’s Gospel suggests that it served as a cover for a while. Today 236 pages(118 leaves) survive, but most of St Luke’s Gospel (chapter 3 verse 9 onwards) and the whole of St John’s are missing.

Books of the high altar, like the Llandeilo Gospel Book were revered not just for the words they contained. They were solemn places for swearing oaths and sealing legal transactions – sometimes by actually writing them into the margins and blank spaces in the book. In the Llandeilo Gospels, on the final page of St Matthew’s Gospel, in the mid 9th century, a Llandeilo scribe recorded the gift of the book by Gelli to the church. There follows a record of a law suit in which a man called Tutfwlch accused Gelli’s family of misrepresentation in a dispute over land at Tyr Telych. Though it begins with the Latin word Surexit (he arose) the memorandum is written in Welsh with only key legal terms in Latin, This is the earliest surviving document in the Welsh language. 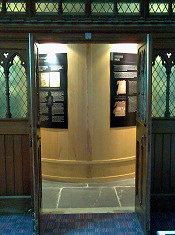 The project was launched at a meeting in Llandeilo on Monday 9th February 2004 (St Teilo’s Day), chaired by the Vicar of Llandeilo, Rev Dr Peter Bement. Interested parties, including representatives of the church, local authorities and tourism bodies, enthusiastically backed the plan.

The project is a co-operative venture between St Teilo’s Church, Llandeilo, Lichfield Cathedral and the British Library.

The Exhibition has been made possible by a grant of £74,528 of European Objective One funding from the 1FUND administered by Carmarthenshire County Council for the Welsh Assembly Government. The successful grant application was made with the assistance of Menter Bro Dinefwr.

Turning the Pages is an award-winning interactive display system developed by the British Library to increase public access and enjoyment of its treasures. Visitors can virtually ‘turn’ the pages of rare books or manuscripts in a highly realistic way, using touch-screen technology and animation. They can zoom in on the high-quality digitised images or read and listen to notes explaining the significance of each page. Turning the Pages allows many more pages to be viewed than when a single opening of the original book is displayed in a glass case, with the added advantage that the original is preserved from damage.

Beginning in 1998 with the Lindisfarne Gospels, the Diamond Sutra, the Sforza Hours and the Leonardo Notebook, the Library has applied the process to nine of its greatest treasures. The Llandeilo Gospel book is the first book not owned by the BL to be treated in this way. It is displayed using a new generation of the TTP software which is even more realistic than before.

Images from the Llandeilo Gospels are shown by kind permission of the Dean and Chapter of Lichfield Cathedral.